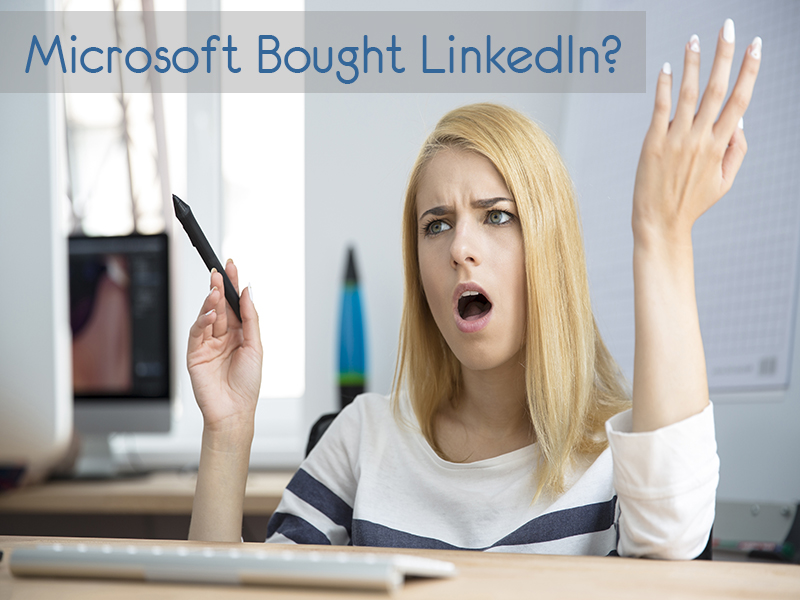 Last week, Microsoft announced an agreement to purchase LinkedIn for $26.2 billion in an all cash deal. That’s a lot of money, making it the most significant acquisition in technology since Facebook purchased WhatsApp for $16 billion more than two years ago. We are being told it offers major advantages by applying analysis on this LinkedIn data to help customers perform better, while giving them a better source of data insight into business relationships. But is it really a good deal for you the individual?

LinkedIn attempted to protect its user’s personal data, from the High School you attended to your current employer and your email address and phone number. But they already had a major password breach that ultimately affected many users. After the breach, LinkedIn forced password changes (the right thing to do) and we can assume that Microsoft will do a better job in regards to information security given their advanced technology understanding and resources. The open question is, however, how will Microsoft protect your data during this acquisition and soon after? Some see risks. According to Roman Yampolskiy, the director of the University of Louisville’s Cyber security lab:

“Any time large databases are merged, unanticipated interaction in data may lead to loss of privacy… Microsoft could start to analyze and market this data.”

Will the User Agreement Change?

Don’t be surprised to see a change to the LinkedIn user agreement in the near future. How do you feel about Microsoft knowing where you went to High School or who your employer is? With LinkedIn, they were focused on selling just one thing, a subscription to LinkedIn. But now your data will be in the hands of a very large multinational company listed on the Dow Jones with many other products and services to sell and can benefit directly from data on 430 million people worldwide.

Ultimately there are many positives of combining the productivity software of Microsoft with the massive LinkedIn professional network, assuming security stays upfront and center. What we may end up getting is a consolidated professional newsfeed with information on users’ contact network, industry and profession merging with Cortana.

The possibilities are endless. Satya Nadella, Microsoft’s Chief Executive, discussed a new potential application that will be able to access the bios of participants in sales meeting, all while receiving a feed from other potential experts in real time. Nadella knew a revolutionary decision was needed and act fast to improve Microsoft’s position in the market relative to players like salesforce.com. His designs for LinkedIn revolve around its rich, detailed data about companies that he hopes to will mesh well with Microsoft’s Dynamics, Outlook and Skype.

Overall, this deal is a vast improvement from Microsoft’s previous attempt at acquiring Facebook. Now that Microsoft has a social graph, it yields a treasure trove of information about people, businesses, and activities, with the understanding that your private data stays private.